After a week with two lessons of repetition on the photosynthesis and a 60 % score on the test the week after I decided to let it go and start the next subject. The students wanted to go forward with astronomy. From the most recent book from Mattias Ribbing, Vägen till maxade betyg: mer fritid och kunskap för livet med effektiv minnesträning(The road to maxed-out marks), he put forth another memory tool, the memory spine. 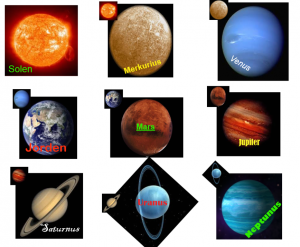 This is the backbone for memorizing other stuff. As the students wanted to learn about space I decided to make the solarsystem the backbone. We started by makeing or taking pictures that the students associated with the sun and the planets. As before they memorized pictures in the chain method. After making the backbone we started to learn about the solarsystem and the things the students wanted to know about. One of their most common curiosities was why the sun burns when they knew that it can’t burn without oxygen. So we read up on the sun and learned about atomic fusion. After that we added some small pictures to the already memorized sun, our backbone, to remember the new facts about the sun and the atomic fusion. The add-on was a beard for the age of the sun and a two hydrogen atoms that collided to form a helium atom. After visualizing and rememorizing the “new” picture of the sun we repeated this work with all their questions and all the planets. 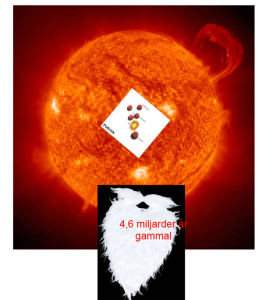 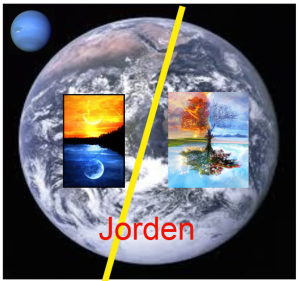 In april I had a lecture in Stockholm about different learning methods I tried over the years and the memory training in particular. To have good data for the lecture I tested the class on all our memory training at the end of march. For the backbone the class in average remebered their pictures fully correct or mostly correct to 74 %. The facts we linked to the pictures was remembered correctly or almost correctly to 61 %. As for the earlier memory training made ruffly 6 months ago about Carl von Linné reached 71 % in remebered knowledge. As for the photosynthesis  52 % of them remembered it.

For a teacher used to have students always letting you know that after just a couple of weeks into some different topic they have forgotten what we did last or that they don’t remember what their paper was about when discussed with parents on evaluation talks these numbers are great!

During the next semester I didn’t get the memory training running and after christmas break I had another lecture on different teaching methods. To be up to date I made the class once again test their knowledge on the previous years teachings. The results where really good. For the photosythesis 62 % remembered it. For Carl von Linné 96 % remembered all or most of it. For the astronomy the knowledge about the sun also reached 90 %. The rest dropped to around 60 % except for the backbone which only reached 30%. It was a surprise that the backbone was the knowledge they remembered the least. Most of the students acctually remebered all the planets but not in correct order and some of them missed out on one of the planets usually Neptune.

Still the results beat all my expectations. One year later and they still remembered a huge amount of what we learned about.

This has reinforced my belief that this is a good method of teaching and I have proved that it is viable and brings good results.

I look forward to keep trying this out in the future.