In september 2013 I started memorytraining as a part of the  regular biology schedule. I had read a book, Vägen till mästarminne: förändra ditt liv med kraftfull minnesträning by Mattias Ribbing, on how to improve and develop a master memory. The methods seemed easy enough and the potential gain looked good. I’ m not sure about the rest of you teachers out there but as for me I have had alot of students that just remeber last week’s lessons, if you are lucky!

The memory training rested on a lot of brain science research and that the brain actually remembers pictures and associations of pictures best.

The methods of the book was about different ways to visualise and encode pictures for deeper memory.

I started the memory training with class 7D. A class with 12-13 year old kids. This hopefully gives me three years to try this on a group to see if it brings any effects before they leave compulsory school.

The first memory exercise was about Carl von Linne. In Sweden he is pictured on the 100kr bills. So I chose that as a familiar picture to start working with. The students got 3-5 minutes every lesson to memorize and visualize the bill. After a few lessons I was fairly confident that they knew the picture by heart and we added some information by adding the birthyear of Carl von Line in red numbers in the middle of the bill. In a couple of lessons and some homework they added this new part of the picture. The book said that the road to easy memorization goes through pictures with sharp angles, round objects and deep contrasts so the red 1707 on the bill was a very clear contrast against the green bill. 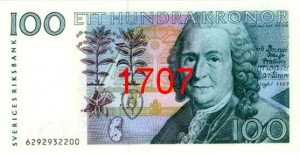 The next step was to add another picture using a method called “the Russian doll method”. I hid a small picture of a family inside one of the zeros in the 100 kr bill. We started memorizing the new picture, of the family, and then linked it to the first picture. As before I used 3-5 minutes each class. We proceeded with this until we had linked a total of three pictures, a family, a fireman putting out a fire and a picture of three great cats. Finally done we had a memory chain with Carl von Linne, born in 1707, the founder of classification of animals and plants who devided them into family, genus and species.

In early November, at the end of the course, 85% of the students remembered all of the information about Carl von Line. Then I started on the photosynthesis…

Go to next part