On Friday, December 12, 2014, I introduced the Curriculum for the Eighth Grade to Class 8B and chose “HIV/AIDS’ as the subject matter for the mirror example. Given that as a rule, students have an interest in this topic, I was hoping that their motivation levels would increase. The class is comprised of a total of 27 students – 13 girls and 14 boys. Students were asked to document their existing knowledge on the subject on a letter-sized (DIN A4) page. They were allotted five minutes to compile their summaries. Subsequently, they were given the opportunity to present their prior knowledge to their respective desk neighbors. During the analysis I was able to determine that some of the students were already quite well informed. Nonetheless, there were contradicting statements on certain issues, e.g. “There is a cure for AIDS” and “There is no cure for AIDS.” In my opinion, these contradictions proved helpful because they made it possible to show students that the existing knowledge is not homogeneous and that the subject will have to be examined thoroughly to verify the correctness of some of the statements. 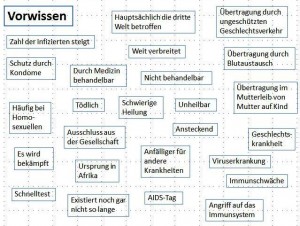 On Thursday, December 11, 2014 I introduced the project schedule to the students by way of a PowerPoint presentation. Next, I confronted the class with an existing knowledge summary, which allowed the students to identify the discrepancies between some of the statements (see above). I then asked the class to verbalize concrete questions that were of interest to the students with the assistance of padlet.com. Subsequently, we compared the issues raised with those covered by the curriculum and saw that while some of the issues were indeed addressed, many of their questions addressed topics beyond the curriculum. We compiled a catalog of questions on the blackboard, which ultimately was relevant for the choice of topics. 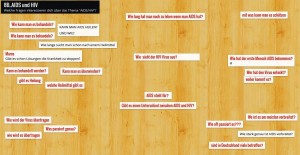 Topics and questions related to AIDS/HIV

The focus on Friday, December 12, 2014, was entirely on the discussion of the following questions:

What will we learn?

We decided to use at least three topics from the catalog of questions per team subject to the condition that at least one of them was also included in the curriculum.

How will we learn?

After taking a vote, the students opted for teamwork. Each team would comprise three to four students. We also discussed the required competences and various media to use for the procurement of information.

How will we verify what we have learned?

The students opted for a presentation and possibly a form of peer teaching. That was where the discussion ended on Friday and it was planned to continue from there in the next scheduled lesson. As homework, students were asked to think about additional options that would allow us to verify what they had learned and to come up with team formation ideas.

The discussion continued on Monday, December 22, 2014. Other verification proposals were presented and discussed. Besides a presentation and peer teaching, the students suggested the creation of a brochure, a poster, a learning circle or a video clip covering the respective questions. Team formation proved to be the largest hurdle in class this time. The students had not thought this through in advance so that this issue took a relatively large amount of time. Ultimately, the class managed to divide itself into eight teams after 15 minutes. Students also received weekly report work instructions. At the end of the lesson, students were told that each team would have to keep a project folder, in which all weekly reports, materials and sources would have to be filed.

On Thursday, January 8, 2015, the students agreed on the topics to be addressed within each team and distributed them among their members. They also determined how they would present their results. We agreed that group presentations were not to exceed 20 minutes. The following focal points were defined for the assessment: Expertise, presentation and project folder. The start of the presentation phase was set for Thursday, February 5, 2015.

The students worked in their teams on Friday, January 9, 2015. I did point out to them that they would of course have to do the majority of the work at home so that they would not lag behind in their timing. During the lesson I found out that students had some problems completing the weekly report. Hence, I initiated a brief in-classroom explanation session so that they could overcome this problem. Over the subsequent five lessons, the students worked on their presentations in teams. At the end of each week, they turned in their weekly reports to me so that I could review each one. This allowed me to track the progress each team made very well. If necessary, I also had the option to ask questions about confusing statements and to have the students correct them. On Thursday, January 29, 2015, the students officially worked in their teams for the last time. At the end of the lesson, the presentation sequence was decided by a draw.

On Friday, January 30, 2015, students were given information on the learning conversation process at the beginning of the lesson. Before the conversations started, the team leaders dropped off the weekly reports with me for review. As part of the learning conversation, the students were supposed to examine the following learning question: What are the most important facts you should know about HIV and AIDS? I observed that some of the students had problems when utilizing this method. The process had to be explained once again. Especially in the third phase (“Everybody briefly presents his or her notes”) I had to assist the moderator to ensure that the learning conversation progressed properly. The results of the individual teams were very encouraging for me given that the students were consciously addressing the most important AIDS/HIV-related facts and were also able to present them assertively in small segments. In conclusion, the students gave me some brief feedback on this approach. They appreciated the fact very much that this allowed the conversation to progress in a structured manner and prevented the individuals involved in the discussion from cutting each other off. Most of the students (about 80 %) said they would be happy to use this method more often. At the end of the lesson I once again covered the issue of evaluating the presentations to make sure the situation was transparent from the start: The grade for each individual student is composed of three equal criteria – expertise, presentation and project folder. As usual, the grade scale ranges from 1 to 6. The overall grade is calculated as the average of the three individual grades.

Most members of the class took this project very seriously. The following grades were achieved: 3x excellent, 19x good, 5x satisfactory. As far as the subject matter was concerned, the students were competent and thoroughly prepared and/or informed. For most, giving a presentation was a challenge since they still have minimal experience in this discipline. I gave individual feedback to each student as far as the grade given was concerned and provided detailed justifications. While this was very time consuming, it is my opinion that this approach certainly makes sense vis-à-vis the students – especially in this type of scenario.

On March 2, 2015 I conducted a feedback round with the assistance of Socrative. Students gave autonomous responses to the following three questions: (I have added brief conclusions of my own and a few examples of student responses below the respective questions)

1. What are your observations concerning the teaching method used in the “AIDS/HIV” project? Please provide a brief description of your experiences!

The students perceived the method as a positive approach. The top priorities for the students were especially the fact that they were able to work autonomously without the teacher’s direct involvement, the teamwork experiences and the integral comprehension of the topic.

“I like this method because we are learning from our collaboration with the other students and because this prepares us for the big project presentation in 9th grade.”

“I like it because it requires us to understand everything ourselves autonomously, which makes it easier to remember what we have learned. And we can also work in teams with our friends.”

“I think that this teaching method is very informative because we learn a lot more when we do our own research than if we just hear it in the classroom.”

2. Have you identified any benefits in this teaching method? If so, please name them!

Only three of 26 students opined that this teaching method is not beneficial for them. Most of the students, on the other hand, are convinced that it makes them more independent because they are allowed to explore the topics without (a lot of) help from the teacher. Moreover, they feel more effectively prepared for the project presentation in the 9th grade and for their future careers because they are learning as well as practicing social and communicative competencies. Some students think that they are more motivated when they work this way.

“Yes. For the presentation in the 9th grade and cooperation.”

“I think that the advantage is that one can work on something independently that also keeps one interested and that one enjoys work more that way.”

“One learns how to work in a team with others, which may be advantageous later in our careers.”

“No, ultimately you learn the same stuff you would learn in a regular lesson.”

3. How would you rate your own contributions to the teamwork? (in percent!)

Seven teams attained a total of slightly over 100 % and one came in just below 100 %.  Based on this result I arrived at the conclusion that the students were able to assess their own contributions to the teamwork fairly well.

I find this teaching method very compelling and have decided to implement such a project in every 8th grade biology class I teach in the future. Moreover, I will generally make student independence, student participation rights and feedback greater priorities henceforth. However, this does not mean that I don’t consider my past didactic and pedagogic effectiveness adequate. To the contrary! In my opinion, the use of diverse approaches that keeps things interesting is the hallmark of good teaching methods. I will merely approach the entire system more open-mindedly.