As part of the Comenius Regio project our Swedish partners made a suggestion as to how teaching can be built on a foundation of scientifically sound methods (see the article ‘Constructing the Mirror Example method’ by Per Lundholm).

The task was to follow the course in Sweden as well as in Germany, so that conclusions about the appropriate methods and their effects in different conditions could be drawn based on the results.

I carried out the project with three classes at the Staatliche Realschule Geisenfeld: two seventh grade and one eighth grade. That way the seventh grade classes could be compared with each other as well as with an older class.

Beginning of the project

All the classes began the teaching experiment in December 2014. In the first lesson the classes were introduced to the course to explain what was going to happen.

At this stage the teaching plan was shown and explained to the pupils using digital tablets. The focus at this point was naturally the subject areas they would be working on. Next the relevant features of the teaching plan for the seventh and eighth graders were presented.

Using the internet tool ‘Padlet’ (www.padlet.com), which is used like a virtual pinboard, the pupils could indicate their preferred topics of interest. The posts were organised according to topic, giving the following overall picture: 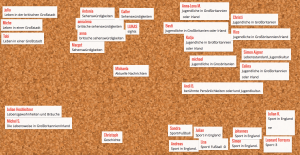 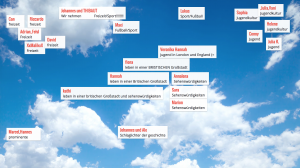 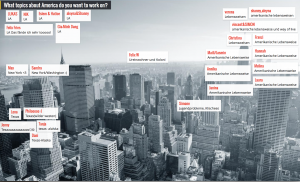 As you can see from the images, various groups formed during the selection process. So as not to make the topic too broad, we agreed in class on focus points, within which the pupils could pursue their interests. In the seventh grade the topics chosen were ‘London’ and ‘London/England’, and in the eighth grade we studied the ‘American Way of Life’.

Personally, I was interested in what the classes already knew about these topics, so I asked the pupils to gather together all the information they knew about them in mind-maps. I combined all the written input I got from the pupils into a big mind-map. 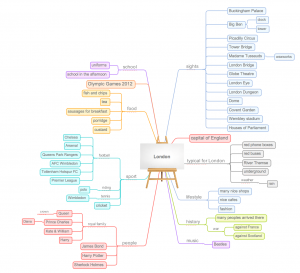 By that point the classes had found a focus topic based on the teaching plan. The next step was to form groups in the classes and organise these according to sub-topics. Based on the pupils’ topics of interest, work groups could be formed relatively quickly. The following image shows the results. 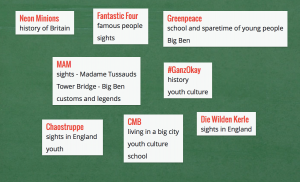 After this task we started the first study questions within the groups. Whenever we posed a study question, the following steps were followed:

Our study questions were ‘How can you learn/work on this topic best?’ and ‘What skills do you need for it?’

Study questions are interesting because as a teacher you can get an insight into your pupils’ thought processes and working methods. Often one overestimates young people when dealing with media or their strategies for recognising and solving problems. By using study questions the teacher can spot faulty approaches to work at the preliminary stage in individual groups, and guide the relevant pupils in the right direction.

The results of the study questions were collected, giving the following list:

Before the group work phase began, we spoke to the classes about what the group presentations and material might look like, as well as how their work might be graded. Among the possibilities were written tests as homework or unannounced in class, or presentations of reports. In the end the classes decided on reports and the work could begin.

So the groups could work undisturbed, we block-booked the school computer room during each English class. That way we could be sure that the pupils would always be able to do their research on the internet. The young people were also allowed to work using their own smart phones, tablets or notebooks.

To make sure the work progressed productively and without long breaks, weekly work plans were drawn up, which group members had to fill in and sign. Each young person was in charge of their own weekly work, and all the group members signed the report. If anyone in the team was untruthful about the work they had actually done that week, the consequence was that the other members would not sign the report. In that way ‘free riders’ were stopped in their tracks early on and nobody felt as if people were taking advantage of them. 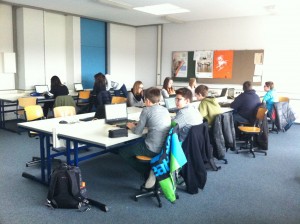 As I used my ‘mirror example’ in English classes, the pupils also had the task of giving me ‘words of the week’ that they discovered during their work and were new to them. I picked the most suitable words for each grade out of all the groups’ words, wrote them down and gave them back to the pupils after every weekend. This vocabulary was learnt as a replacement for the words that would normally be learnt when working with text books.

Before the presentations were given the classes had one more round of study questions to make sure the topics had been understood, and the groups got feedback on the work they had done up to that point. 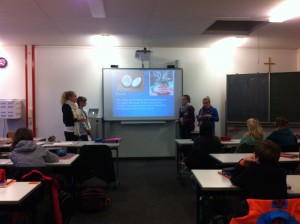