The first time the class met the mirror example they where seventh graders. We where about to start a new subject, physics.

The first time the class was met with the mirror example they where seventh graders. We were about to start a new subject; physics.

The first step of the mirror example is for the teacher to decide on a topic from the curriculum. I chose astronomy and basic knowledge of electricity.

The next step is to catch the pupils pre-knowledge. They were put into groups of four pupils and asked what they knew about astronomy, space and electricity in general. They were given about 30 minutes for this task. This was their first learning conversation with all of the structure and rules for it. As this was new for them, it took more time than 30 minutes and I had to support the groups a lot regarding all the roles and the general structure of the learning conversation. 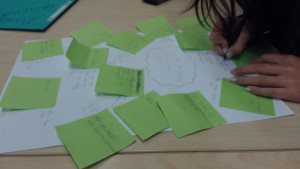 After that, the next step is to ask them what they want to learn or are curious about in relation to astronomy, space and electricity. I asked them and they wrote down their questions for another 10 minutes. After that, I collected their notes. 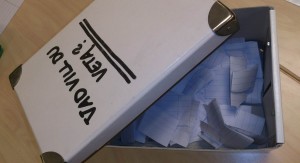 What do you want to know?

Later, I looked through all their notes and put all their answers into one document. Then I categorized the information into different groups according to the mirror example.

During the next lesson, I presented the categories to the pupils and we started to discuss how to learn compulsory content from the curriculum in terms of knowledge and skills. We also discussed in what way the pupils wanted to learn all of it. They gave me a couple of ideas like, group work, practical work and watching movies. I also asked if they wanted to keep doing the memory training and they agreed to keep doing it. Finally, we discussed how they wanted to be examined. We decided to have some smaller check-up tests and a final bigger written test. When this was done, I made a plan for the coming weeks of lessons.

The plan consisted of:

The plan was then followed. The only setback was that I couldn’t find any time to have a second formative learning conversation as was the plan according to the mirror example’s second to last step.

The final step of the examination was done with a written test about astronomy and electricity and with a practical section, in which they had to show laboratory skills and apply knowledge they had gained.

After the summer holidays, we started the semester with chemistry as their choice of subject and we repeated the mirror example procedure. This time around I managed to have a learning conversation as a formative check-up before the final examination. During the course of the project, we have made several more tryouts using the mirror example.