The teachers think that learning conversations are a good tool to use in teaching but what do the students think about it? What gains and drawbacks do they see with this way of learning?

The first question they discussed was:

“Why is it good to use a learning conversation as a tool for learning?”

Our students thought that it was good to practice talking and putting up arguments and that they can remember more after a learning conversation. All of them were interested in discussing different topics. This led to different perspectives emerging in the conversations and the students thought this taught them a lot as it led to deeper discussions. They also realized there were no rights or wrongs in the conversations and that also helped in learning. Another important aspect they mentioned was that all of them got time to speak and that everyone had the same amount of speaking time.

Our students also believed that a learning conversation could be a good way of starting up a new subject or topic in order to provide some inspiration and hooks for further work or study.

The next learning question they talked about was:

“Are there any drawbacks to a learning conversation?”

Several times they mentioned that the structure of the learning conversation was difficult to grasp until you had had a couple of try outs. They thought that it is important that the teacher is clear on how to proceed. The students also felt that it was hard to know what to write down in the documentation in the beginning.

The composition of the learning groups was critical in determining if the conversation would be successful or not. The students felt it was easier to speak freely among students they had befriended. There was a fear of being called stupid if you had a different point of view. It could also lead to a problem that no one would ask any questions. Another issue was that some students had a hard time accepting other students’ points of view. Some pupils stated it was important that the learning question wasn’t too easy. This would lead to everybody having the same opinion which wouldn’t generate any further questions and only little learning taking place.

Some of our students pointed out, that it was important to use the post-it notes in a correct way. Only short phrases or single words should be written on each note. Too much text would make grouping and searching for patterns difficult. 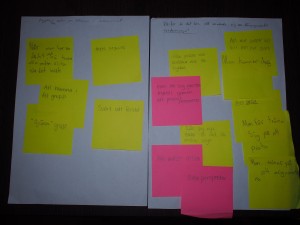 The students agreed that a learning conversation is a good learning tool in class and that they enjoyed working with it but that it is important that the teacher is clear about the structure and has a watching eye on how well the students work together in the learning groups.